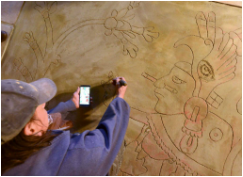 Mambo Flores
He is a true renaissance man in a modern world. His work can be seen all over San Antonio and you would not even know by his humble attitude. He is completely responsible in the undertaking  of restoring the art galley Efrain Gutierrez Taller. 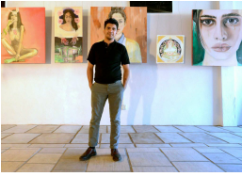 Michael Esparza
An artist on the rise, Michael Esparza is becoming a catalyst for a new age in San Antonio. Working in a variety of mediums, materials and skill sets, he create a voice all his own. A recent graduate of The University of Texas at San Antonio, he exhibits a passion for exploring intimately complex human interactions, framing them within a warm nostalgic composition. His work can be seen as an extention of himself, an affinity for romanticizing the past fused with a deep understanding of the present and future. Hauntingly beautiful pieces, exuding a mix of timid sexual provocation and slowly elevating sense of panic. Yet above everything else his work encapsulates hope, both firmly in our grasp and sadly that which is just beyond our fingertips. 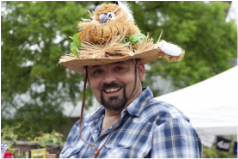 Jeff Hull
Art is life for Jeff Hull. Through the many challenges of life, art had lain dormant to this natural self taught artist as he struggled with abandonment, addiction, and homelessness. Given an opportunity to take a class on The Artist Way material with artist, Aminah Herrman, Jeff reacquainted himself with his powerful natural abilities as an artist. Since that experience, Jeff has been painting a diverse body of work that has stretched from Texas to California and Mexico. The strong inspiration to help others in their journey has engaged Jeff in many projects donating to special causes. He has created venues for art and cultural experiences which have highlighted the efforts of various Non Profit efforts.The list is long and includes scholarship programs for young Hispanic women, ACTS retreat programs, Artisans Night Out in Government Hill among many other events. He has curated he Segundo de Febrero: Treaty of Guadalupe Hidalgo exhibit at Centro Cultural Atzlan Gallery.  Hull also appears in the documentary "Art in Context: Dia de Los Muertos Art funded by the University of Texas and shown regularly on KLRN and "Una Noche de La Gloria: Art in the Cultural Zone". Mainly painting in acrylics on canvas, Hull remains true to the belief that "there should be no rules to art" not allowing boundaries to limit his style and technique. He believes "The canvas is my teacher and I am merely the student" and that "I hold the brush and God does the work". Hull attributes his success as an artist to the support given from his patrons and remaining true to his self. 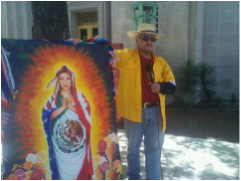 Ronald Rocha
His First job was as a sign painters helper for the Dr. Pepper Co during High School years.  Then he worked as an artist and production manager during the "Golden Age of Black and White television". During the KCOR TV to KUAL-TV Ch 41 transition period, His duties were as production manager.artist, news photography ,lighting,sound and studio and remote broadcast production. There he became the First full time employee of what today is know as KWEX-TV, channel 41, Univision the first Spanish Language Television Network. Later He Ghosted the Yogi Bear Sunday page newspaper comic strip. First Spanish language announcer in Northern California at KGSC-TV. He worked as Art Director and Spanish Announcer At KSBW -TV and NBC he worked as a courtroom sketch artist. Was designer of first toppless bars in San Francisco bay area, Have worked along side of artist from the Vatican at St. Joseph's Cathidreal in SanJose California. My artwork has appeared in the "Flying Palace" private airplane belonging to the Sultan of Brunei and the institute of Texan Cultures. 1993
designed and coordinated the "The American Dream Racing Team" to break the World Land Speed Record, the sound barrier on the ground in a four wheel car. Worked as Publicity Director for the Southeastern United States for Azteca Films ( Mexican Film Industry). International Consultant-Public Relations Coordinator for pilots, engineering and maintenance crew and flight attendants staff of the Saudi Royal Family. At present, he is assisting the Charro National Federation USA as international publicity to reclaim identity as Mexican Native American's.